Apart from the products listed on this website I can make almost any part for any fairground model in any scale – just let me know what you require and I will be pleased to quote.

I designed and built these Dennis Sabre fire engines in 1/48th scale for Adrian Towner’s World of Miniatures. These were made by Adrian for Dennis for their 150th anniversary and were presented to Chief Fire Officers all over the country. Like most of these projects I produced brass patterns for the parts to be cast in white metal and once cast assembled them. I also designed the ladders and handrails for etching. Another modelmaker made the master for the resin bodies and Adrian painted, assembled and transferred them before fitting into a brass and mahogany glazed display case. The photo shows the first batch ready for despatch. 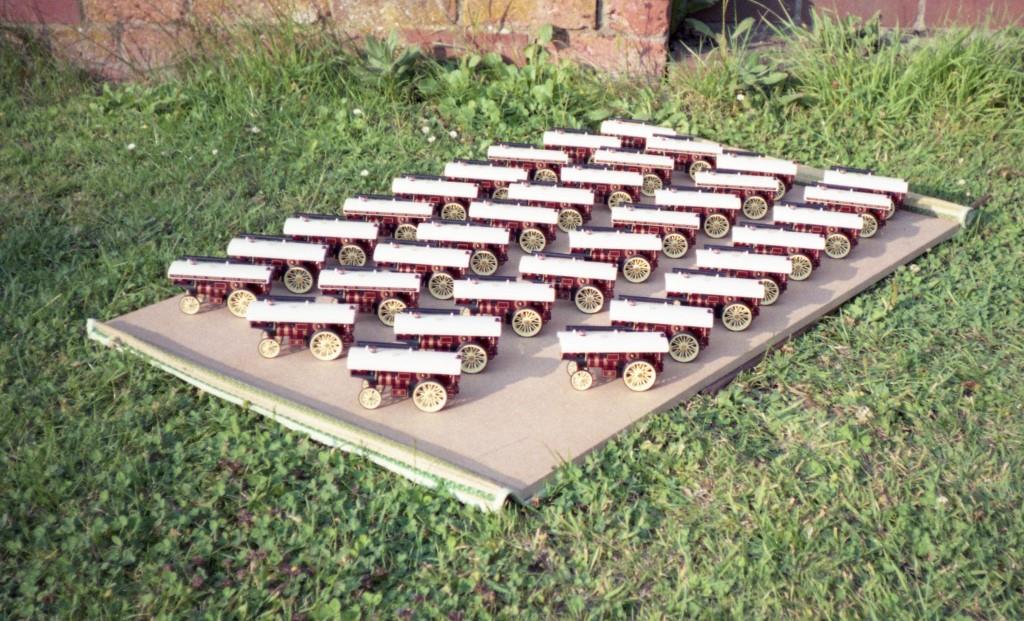 A batch of Burrell scenic showmans engines produced as promotional models for the 25th anniversary of the Great Dorset Steam Fair. These were made for Les Andrews’ Milestone Models. Les had been producing Code 3 Matchbox models for many years but something special was required for the 25th anniversary. I designed the model using the maker’s plans and produced the brass patterns for the white metal casting. The model was designed as a series of sub assemblies which could be individually spray painted in different colours by Les before final assembly. This first model was very carefully designed and masters made so that further engines – whether scenics, standard showmans or road locomotives could be produced with the minimum of new patterns. This meant that the very considerable investment in the initial set of patterns could be recouped over, what would eventually prove to be, a whole series of engines with production running to well over 2000 models.